British Side X Side Championship gets off to flying start Tuesday 27 March, 2012

A double win for Max Hunt ensured overall victory this weekend as he took the season opener of the 2012 ACU NORA MX British Side X Side Championship. Held at the Wroxton MX track, it was the first of eight rounds and with over twenty machines competing in a superb event for drivers and spectators.

With a mixture of expert racing drivers and novices to the sport, the 20 minutes qualifying and practice gave competitors a chance to familiarise themselves with the track and their machines.  There was good competition for the Polaris RZRRACING.CO.UK Challenge Cup with less than five seconds separating the top five riders. In qualifying it was Max Hunt who got the fastest time ahead of Josh Barrett and Richard Avis. The rules state that there are no engine modifications so no rider has any advantage with their machine. It’s all down to the skill of the driver and of course, a bit of luck! 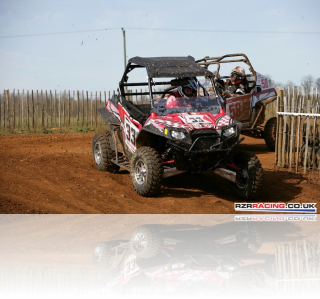 Mick Edwards took the holeshot in the first of three 15 minute races as 20 Side X Sides battled it out around the first corner. It was an incredible sight as drivers skilfully manoeuvred around the track, jostling for position with lap times only seconds slower than the quad bikes. Behind Edwards, Dave Thornton was holding off Josh Barrett as Max Hunt appeared and made a move for first place.  “After getting a solid eighth place start, I pushed hard and got up to fifth within two laps.  A couple of laps later I could see the guys in front and hit the table top perfectly passing two and setting myself up for the next jump. I hit that smoothly and went from fifth to first in two jumps. From there I had a clear track and could put in some fast laps.” A delighted Hunt reflected after securing the first win of the championship with an impressive 13.5 second lead.
Stefan Murphy had an excellent race and took second place with Barrett making a good recovery after an earlier knock which sent him off track, taking third. 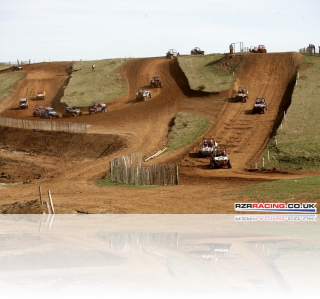 Another exciting start marked the opening of race two and within a few corners Richard Avis just edged ahead of Barrett with Murphy and Hunt following closely behind.  By lap three, Hunt again took the momentum through the tabletops with the biggest jumps of the day and working his way into the lead. With over 15 minutes gone, Barrett was then able to pass Murphy as Avis had slipped back to fourth. Hunt finished with a six second lead from second place Barrett and Murphy in third. 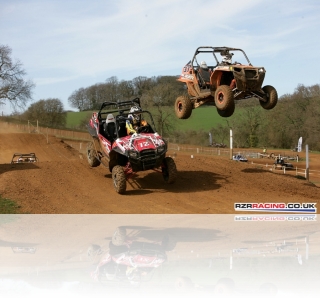 The final race of the day started fast and furious as a number of side x sides collided at the first corner. Peter Martin rolled but landed upright and was straight back into the action but it ended the chances of a podium finish for Barrett as he was knocked numerous times before a  top ball joint was smashed and he was unable to finish. Meanwhile, it was Murphy who had taken the lead and immediately had Hunt in his rear mirrors. Murphy kept his cool and guided his Polaris RZR XP900 to victory with a superb first win. Hunt finished second with Avis taking his best finish of the day in third. 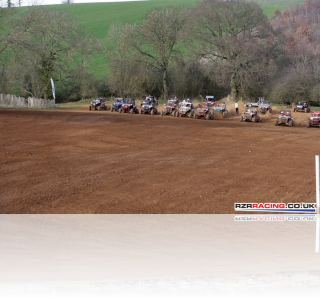 Hunt finished first overall with Murphy in second and Avis in third. He commented after collecting his trophy at the podium: “Epic! That is how I would describe today. I really didn’t expect the track to be as good as that. It was excellent, I really think all the work Nora MX and RZRRACING.CO.UK have done to make today has been excellent and they are onto something really special here. Thanks to everybody involved in making such a great event and I’m looking forward already to round two.”
Round two takes place on the 22nd April at the new Culham Track. Check out RZRRACING.CO.UK for more details. 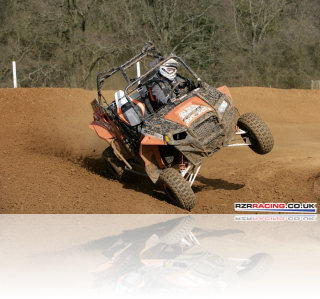 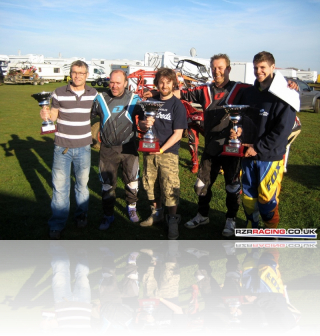 Full table of results can be found on mylaps here: http://www.mylaps.com/results/showevent.jsp?id=755565

Tags: Round One at Wroxton, RZR Racing, Side x Side Racing, Wroxton Racing