Following on from the successful demo event back in October 2011, Polaris dealer ATV World have organised a second event for prospective Side X Side drivers to try out the Polaris RZR XP900. This time taking place at Enduro UK, Witham-On-The Hill, near Stamford Lincolnshire on the 26th February 2012.

The Polaris RZR XP 900 features an all new 900 Twin EFI engine that produces an awesome 88HP with the engine and transmission arrangement transfers 65% more power to the ground than RZR 800. The XP 900 accelerates 29% quicker than the nearest competitor thanks to its superior HP to weight ratio. It also boasts an industry first three link trailing arm with 14″ of rear wheel travel & 13.5″ of ground clearance. The RZR XP 900 has everything, power, suspension and handling. For full specifications, pictures, videos and a sport Side X Side comparison visit www.atvworld.com.

An eight round RZR Racing Championship is confirmed for 2012 with the opening race on the 25th March and Wroxton in Banbury. There has never been a better time to get involved with his exciting new race series. Dates and further information about the championship can be found at www.rzrracing.co.uk.

With the team from RZRRACING.CO.UK and NORA-MX promoting the demo day at the recent Autosport Show, spaces are now limited so if you want the chance to experience the Polaris RZR XP 900 for yourself, call ATV World to register and speak to either Martin or Phil on 0113 2778663. Refreshments will also be provided. So don’t delay, if you want to try it out, give ATV World a call today. 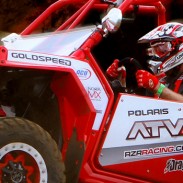 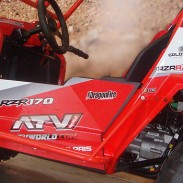 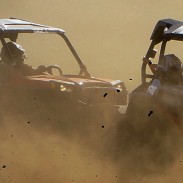 Side X Side Action at Wroxton this Weekend