Reigning Champion #77 Richard Avis leading #172 Alfie Hyde The Polaris RZR MCF British Side by Side Championship headed across the Welsh border to PAR Moto Park on the outskirts of Llandrindod Wells for round four of the championship on 1st June. With twenty entries the drivers would be split into two groups following morning […] 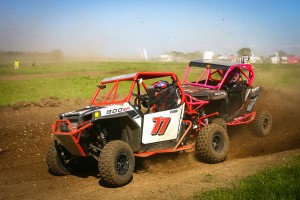 The Polaris RZR MCF British Side by Side Championship headed across the Welsh border to PAR Moto Park on the outskirts of Llandrindod Wells for round four of the championship on 1st June.
With twenty entries the drivers would be split into two groups following morning qualifying which was headed by James Chorlton driving the wefightanyclaim.com Polaris 1000 by a fraction over half a second from Hyde Racing’s Dean Hyde also in the 1000cc class. Heading up the 900 cc class was Richard Avis in fifth, first of the non-qualifiers for the A group was Tom Fletcher missing out by just 0.1 of a second.

Ten drivers lined up for Moto 1 of the A group and it was Chorlton that got away from the grid start in the lead which he wouldn’t relinquish before the chequered flag was shown. Alfie Hyde in the second Hyde Racing 1000 Polaris made a move on brother Dean on lap three for second place but was struck by mechanical gremlins and was sidelined with 4 laps to go leaving Dean to retake second in the Moto. Richard Avis in the Rip ‘n’ Roll Offroad 900 Polaris also took advantage and moved up to cross the line in third ahead of the Caged Steel 1000 Polaris of Jamie Thwaites.
Moto one of the B group was led away by PAR Homes Jason Rowlands in the 900 Polaris and wasn’t passed going on to take the win, Shaun Jenkinson in the 900 Polaris held on to second spot until lap seven when a roll sidelined him and Steven Berry took up the vacant space and took second place ahead of the pairing of Adrian and Callum Loveridge in the coolforyou Mark Higgins Motorsport Polaris. 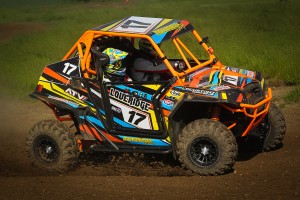 Line ups for the second Motos were to change with the bottom three from A1 moving to B group and the top three from B moving up. It was once again Chorlton that led the class early on but was passed on lap eleven and eventually dropped off the result and collected a dnf. Dean Hyde took over at the front going on to take the win by over six seconds from Avis in second and PAR Homes Polaris driver Paul Rowlands.

After mechanical problems struck championship leader Alfie Hyde in the first Moto and was demoted to the B group it was thought to be a foregone conclusion on the outcome of Moto two but it was Josh and Guy Barrett in the Barrett Racing 900 Polaris that got away at the front. Alfie Hyde made the pass on lap four to take the lead to the finish. Barretts held on to second until disaster struck on lap 9 leaving second place to the third of the Hyde Racing machines of John Lyne. Third place and promotion for Moto three went to Paul Severn and Charles Baskerfield in the PJS Installations 900 Polaris. 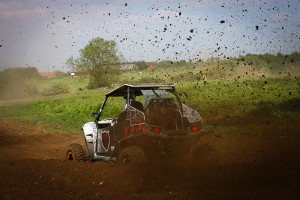 #7 Paul Severn putting the power down

Dean Hyde got the start in A group Moto three until passed by Richard Avis on lap three. Paul Rowlands was on a charge however and relieved Avis of first place on lap 5 and went on to take the victory. Starting at the back, Alfie Hyde drove a great race pulling through the field to collect fourth place across the line behind the FRO systems Polaris of Mark McCann and Richard Brenton with Avis second and Dean Hyde eventually taking fifth.
The final Moto for the B Group saw Jason Rowlands once again at the front but was passed by Chorlton on lap three after Chorltons DNF in A Moto 2 saw him demoted. Chorlton went on to take the win ahead of Jason Rowlands with Shaun Jenkinson in third. 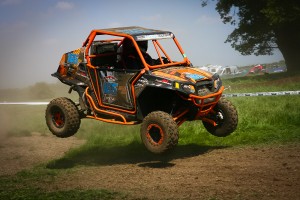 #165 Jason Rowlands landed a good points haul at round four 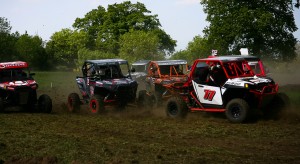 The overall win in the 1000cc Modified class for the round saw Paul Rowlands and Dean Hyde tied on 67 points with Rowlands achieving a better last Moto giving him the victory with Chorlton in third on 63. The 1000cc standard win went to Jamie Thwaites with the 900cc class going to Avis on 75 points with McCann and Brenton in second on 66 and Lyne and Berry tying for third on 50 points. 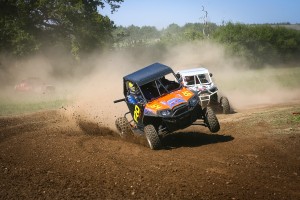 #64 Mark McCann testing the grip of his Fro Systems Polaris RZR 900 and that of his passenger Richard Benton !

The busier 900cc class is led by Avis with a very slender five point advantage over McCann and Brenton with the Barrett pairing in third, John Lyne fourth and Jason Rowlands in fifth.

FOLLOW THESE GUYS AND GIRLS TO ROUND FIVE ON SUNDAY 20TH JULY. Venue will be Neuadd Farm, Penybont, Llandrindod Wells, Powys, LD1 5SW. 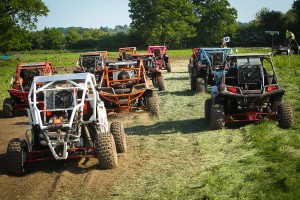